The History of the Chinese Language

Being more than 6000 years old, it is one of the oldest languages in the world. The evidence of this fact can be found in Chinese characters that were inscribed on shells of ancient turtle shells that date back to the Shang dynasty. This dynasty existed between the years 1766 – 1123 BC.

This language comprises of more than 40,000 characters. However, one of its most distinctive features is that the Chinese language utilizes single characters or symbols to represent each of the words that appear in its vocabulary. Traditional Chinese was simplified to make it easy to learn. The simplified Chinese consists of some characters that have fewer pens strokes compared to traditional characters.

With the simplified Chinese, one can be able to read a newspaper by utilizing as little as 3000 characters. It meant that communication was made more accessible. You did not have to know all the 40,000 characters of the language.

The Significance of Language in the Development and Interaction of Humankind

Language is a very fundamental factor that dictates how human beings interact with each other. It can be defined as a primary system where both sounds and signs are used to depict ideas, actions, and objects. It is a conduit through which people can communicate with one another. Human beings are very social creatures. This nature is usually facilitated by their ability to communicate through the use of language.

Even though the language is mostly spoken not written, the development of writing enabled humankind to be able to dissipate knowledge far and wide. In this manner, humanity was able to develop and come out of the dark ages. Language is fundamental as not only can it create cooperation through the transference of communication, it also helps eliminate any confusion and misunderstandings. It, in turn, helps create a unified society where both social and economic development is possible.

Fun Factors that Make Chinese a Language Worth Studying

Nowadays, more and more people are learning Chinese. It may stem from several different reasons. These may either be business oriented or even the pursuit of personal growth by exposing oneâ€™s self to different disciplines. Even though Chinese has been touted as one of the most challenging languages to learn, the modern world has made it a little bit easier.

Nowadays, you can quickly get your hands on an app to help you translate English to Chinese. It will help you communicate with the locals, even where you do not have a strong command of the language. That being said, here are some facts that will get you even more interested in this language:

While English may be considered the most commonly spoken language in the world, it is essential to remember that most of the people that speak English usually use it as their second language. However, Mandarin, which is a dialect of the Chinese language, is spoken by more than 900 million people as their first language, that is, their mother tongue. It means that when you learn Chinese, you will be able to communicate with over a billion people in the world flawlessly. Wouldnâ€™t that be cool?

As we had mentioned above, the Chinese language consists of more than 40,000 characters. It may seem very discouraging as itâ€™s impossible to master all these characters. However, realize that you only need to learn 3000 characters, and you are good to go. That makes it easier, right?

Chinese grammar is elementary compared to other languages like English or French. Here, tenses are expressed using time frames, i.e., tomorrow, today, or the future. The language also does not have any conjugations.

As with any other culture, language is highly entrenched with the cultural practices of the people speaking it. Therefore, when you learn the Chinese language, you will also be learning the culture, too, killing two birds with one stone.

Remember, we stated that intonations are a very crucial part of this language. Well, Mandarin contains a fifth tone that includes characters that have the same pronunciation. It makes for one challenging tongue twister, right?

Similar to the hieroglyphics of the Egyptian language, Chinese also uses images as characters in its vocabulary. It makes it the only modern language that is pictographic hence making it an exciting one to learn. Right?

Even though sometimes learning Chinese can start as being a strenuous activity, it is essential to realize that it is a fun one, too. There are very many exciting things that one comes across when studying this language. Therefore, whenever you are thinking of taking it on, do not be discouraged. Realize that the study of this language is a journey worth pursuing. 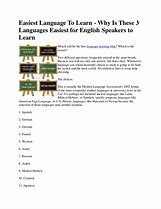